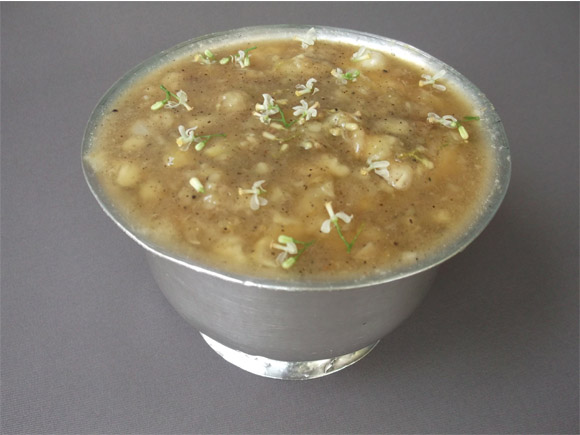 This vintage silver bowl is used for keeping the Ugadi pachhadi the traditional chutney prepared every year for Ugadi festival. We used to call this vintage bowl as Vendi Mattu Ginni meaning the silver bowl with Mattu, a type of supporting ring under the bowl. This vintage silver Mattu Ginni is used only for two occasions. Firstly, to hold and serve Ugadi chutney every year and secondly to serve curds whenever we have a special guest or ceremonial meals on festive and religious occasions. The rest of the time this beautiful silver bowl is kept in the wooden cupboard in the bedroom. For each occasion, my mother used to take out the Mattu Ginni from the locked cupboard clean it with white lime powder domestically made with sea shells called gulla muggu. If the sea shell powder is exhausted, until the fresh lot of sea shells arrive, my mother used to make lime powder by crushing the lime stone called raati muggu. At any cost the silver bowl has to be cleaned with natural lime powder only. Once in a while, the vendimattuginni is given to our only trusted gold smith, Somasekharam, for polishing. After polishing he is to return the precious silver bow to my mother wrapped in a pink colour paper to make it look like an almost new one.

The antique VendiMattuGinni has a great history. My paternal grandfather, Yenugu Krishna Murthy garu (garu is a respectful way of addressing elders in Andhra) has started the only school in our village Someswaram, in the East Godavari District of Andhra Pradesh when he was around 18 years age. The school started with few students has grown up to a large educational institute and was later taken over by the government. He served the school as a head master till he retired in the year 1944. His retirement was an emotional and touchy occasion to my grandfather as well as to the entire village. On this occasion the students collectively presented this enchanting silver bowl to my grandfather. It is inscribed on the back of the antique bowl as “Sri Sishya Sangham Ye.Kru.gariki samarpinchinadi.12-11-44”. Meaning that the bowl was gifted to Shree Yenugu Krishnamurthy, by the Disciples Association on the day, dated November 12, 1944. He served as a teacher for 40 years and the entire village used to address him as “Mastarugaru” meaning “teacher sir” and not by his name. Our family has a great emotional and esteem value for this antique silver Mattuginni. That is why it is used only for the Ugadi pachhadi which is a new year for Telugu community and is celebrated with great religious fervour.

During my younger days Ugadi festival means, the inevitable oil bath early in the morning, prayer to our family deity and tasting the Ugadi chutney kept ready by my mother in the silver bowl. I used to run away from my mother to avoid the chutney since it used to be more bitter than sweetish. My mother would catch hold of me and put a spoonful of pachhadi in our palm and ask us to swallow. I used to close my eyes and manage to swallow the chutney with a puckered face. In order to keep me happy on a festive day my mother is to reward me with a piece of new jaggery and I used to tuck the piece in between the cheek and tongue and run away from the scene. Later I used to take a raw mango, cut into pieces, sprinkle red chilli powder and salt and eat it along with the saliva that already sprang out while we cut the raw mango. It is on later days that we understood the significance of eating the Ugadi chutney with its varied and mixed tastes. I subsequently started taking the once-in-a-year dish with enlightened attitude, reverence and started enjoying the mixed variety of tastes.

When is Ugadi Celebrated?

The word Ugadi comes from the Sanskrit word”YUgadi” “Yuga” means age and refers to the age we are living in now called Kali Yuga. “Adi” means beginning. Hence YUgadi means beginning of the new Yuga or new age or era.The new Yuga is the current running Kali Yuga which started following the death of Lord Krishna who belongs to Dwapara Yuga. According to the scriptures the death of Lord Krishna took place on 17th February 3102 BC,Kali Yuga started from the mid night of 17/18 of 3120. Ugadi festival denotes the New Year day for the people of South of India between Vindhya Mountains and Kaveri River covering the states of Andhra Pradesh, Maharashtra, Karnataka and Goa who follow Lunar calendar.

YUgadi or Ugadi, Samvatsaradi are all meaning same thing denoting new year. Hindu Calendar which is Luni- solar in nature has a cycle of 60 years and each year has a unique name. Each year is subdivided into 12 months and each month has a name. On completion of 60 years the Hindu calendar starts again with the first name. The Hindu calendar has two version called Suryamana and chandramana. In Suryamana the calendar is worked out basing on the movement of the Sun and in Chandramana basing on the movement of moon. Generally Hindus from the north of India ( India that is north of Vindhya mountains ) follow Suryamana and the Hindus from South India (India that is South of Vindhya Mountains) follow Chandramana. Hindus follow Saka calendar known as Panchangam which begins with the month of Chaitra, and Ugadi is the first day of Chaitra masam which falls in the English calendar March-April. Hindus who follow Chandramana, observe the newyear on the first day of Chaitra Masa and those who follow Suryamana, the new year comes two weeks after first day of Chaitra Masa. This is why Hindu New Year is celebrated twice in the year with different names and at two different times of the year.

It is called Ugadi in Telugu and Kannada, the people of Maharashtra call this festival Gudi Padwa. This Hindu New Year is celebrated by Marwaris of Rajasthan as Thapna, Sindhis as Cheti Chand, Manipuris as Sajibunongmapanba. The people of Tamil Nadu celebrate the New Year festival as Puthandu, Punjabis as Baisakhi, and people of Kullu Valley of Himachal Pradesh as Seri Saja and West Bengalis as Pohela Boishakh.

Ugadi is also celebrated by the Hindus of the countries of Mauritius, Bali and Indonesia as New Year by name Nyepi. The Hindu calendar has spread to the other countries due to common rule under Satavahana Dynasty.

The Hindu Shaka almanac starts with the date on which the great Shalivahana Empire was started and hence is called Salivahana Shaka. The king Satavahana also identified as Shalivahana and Gautamiputra Satakarni is known to have started the Shalivahana Era which corresponds to 78 AD of Christian Era.

According to Hindus, Lord Brahma started creation on the day of Ugadiie. Chaitra Suddha Padhyami. The beginning of vasantha rutu, the spring season also coincides with Ugadi when the nature is in full bloom and the new life takes place justifying the beginning of new year with new hope and signifying prosperity and growth.

The pandits prepare new panchangam, the yearly calendar and read it for the people of the village for them to have a glimpse of the life to come in the new year. This ceremony called Panchanga Sravanam is done in the temple or under the tree at the centre of the village. The major predictions will be the rains for the year in which the villagers were very much interested in for the crops for the year on which their prosperity is depended. Also the major predictions are the solar and Lunar eclipses known as Grahanam.

On the day of Ugadi the people clean in front of the houses by splashing cow dung water and decorate with colourful rangoli known as muggulu made with lime powder or chalk powder or with rice powder. The main doorway called Simha dwaram is decorated with mango leaves and flowers. Then they take traditional bath called Abhyangana Snanam where in Til oil (sesame seed oil) is applied to the body and head and washed off with a paste made out of herbal powder called Nalugupindi. The oil from the head is washed off with soap-nut solution (herbal shampoo). Then they pray to their family deity and wear new cloths.After this purification they take Ugaadi Pachhadi, the special chutney prepared for this day with ingredients that produce 6 different tastes.

The significance of Ugadi Pachhadi

Ugadi pachhadi denotes a great philosophy of life, in life we experience various emotions like happiness, sadness, anger, bitterness and we should take all experiences, pleasant or unpleasant, good or bad in a balanced way. Similarly Ugadi chutney consists of 6 varieties of ingredients that have six distinct tastes called Shadruchulu-some pleasant and some unpleasant. Tasting of Ugadi chutney on new year’s day remind us that life is a mixture of different experiences and we should accept and take them in a positive attitude. The Ugadi Chutney consists of the following special ingredients that produce the unique characteristic tastes-

Green chillies or black pepper :for spicy and hot taste

New crop of unripe mango: for the tangy taste.

Each taste is associated with different emotions in our behaviour.

Bitterness is associated with Sadness

Sweetness is associated with Happiness

Salty taste  is associated with Fear

Sour taste  is associated with Disgust

Tangy taste  is associated with Surprise

The Ugadi chutney made with different tastes should be recognised in the spirit of equanimity to lead a balanced and composed life. It denotes the fact that life is a mixture of different emotions and experiences and all should be taken in the same spirit. The Udadi pachhadi is a symbolic taste of Different flavours of life that need to be harmonized and balanced to lead a healthy and happy life.

How to prepare Delicious Ugadi Pachhadi

Keep all the ingredients in a porcelain or stainless steel bowl and mix all of them with the hand to form a gravy or sauce like consistency. If you like the chutney to be liquid you can add little bit of water till the required consistency is achieved. The traditional way of tasting this pachhadi is by eating with the hand. Take one table spoon full of pachhadi into the cup of your palm and put into the mouth just like you take the prasadam from a temple priest.The right way to taste the pachhadi is to keep it in the mouth for some time so that the tastes of various ingredients are experienced in the mouth and allow the saliva flow into the mouth. Bite and chew the cut pieces of mango, sugarcane, coconut, neem flowers and swallow the mixture slowly. The ceremonial way of tasting the Ugadi pachhadi is one way of having a family get together on the festive occasion and share the experiences of each on the taste of the chutney. The Ugadi Pachhadi has a lot of medicinal properties with herbs like neem and other ingredients like raw mango, new jaggery and tamarind containing properties that clean our system and serve as prophylactics (prevention of disease).May be the tradition of eating Ugadi pachhadi in the beginning of the year has inherent system of preventive medication to face the changing seasons