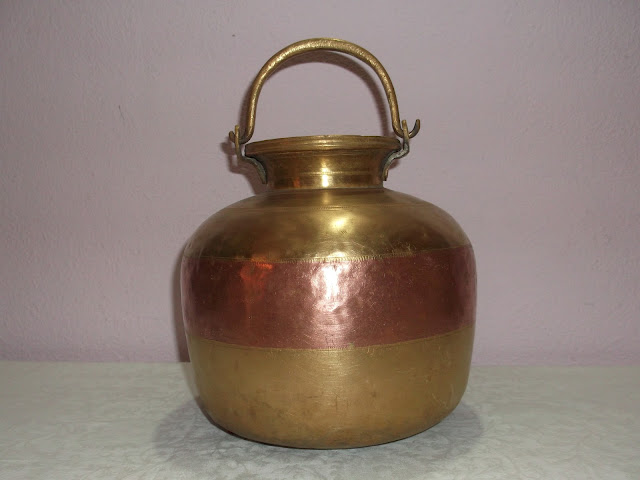 I had been to Varanasi several times and whenever I go, I make it a point to spend as much time as possible on the banks of Ganges river at its various ghats with beautiful steps and colorful people and mysterious ceremonies which take place on the ghats and in the Ganges river. The most inspiring sight to watch is the ceremonial bath that millions of Hindu religion followers take in the Ganges. After the bath they carry the sacred water of Ganga river to their homes to keep the water in their puja(worship) rooms for using the same for several ceremonies and to gift the precious holy water to near and dear people back at their homes and places.

During my recent visit I have noticed that the holy Ganges water is collected and carried in plastic bottles and cans that I felt it is treated like any other water we normally collect. Before the invention of plastic, the holy Ganges water is collected in beautiful copper or brass vessels normally called Chambu in South India and Lota in North India and these vessels come in various shapes and sizes.

Even now the staunch Hindu believers collect and carry the sacred Ganges water in the copper or brass vessels that are sold at the ghats of Ganga river or near the markets leading to the Lord Vishwanath temple, the name which signifies the lord of the universe. As an antiques lover, I have collected these Ganga water lotas and I take immense pleasure in presenting these items in this blog for the viewers to get a glimpse of the tradition and style these containers reveal.

Significance of Ganges Water
It always remained a curious thought in my mind as to why invariably all the pilgrims to holy Benares take a dip in the Ganges river and carry the sacred waters of Ganga to their homes. My research shows the following reasons for this spiritual ritual.

Water has been an object of worship from ancient times in India. Water is sacred, life giver and life preserver; it has purifying power and destroys evil. Essentially water is the building element of life and the entire creation depends on the mercy of god for the water. Hence water is divine and more so the water from the sacred river of Ganga.In Hindu religion there is a great importance of this holy water. No Hindu religious ceremony or practice takes place without holy water of Ganga river.

People preserve the holy water of Ganga in copper or brass  lota. It is believed that if this water is kept in the copper lota in homes then it produces holy vibrations which fight away bad luck and evil. It endows material prosperity and spiritual growth. Part of the holy water taken to their homes is poured into the well or other water bodies to get continuous pure and holy water from these water sources.

The river Ganges is considered as sacred and is worshipped as a deity in Hinduism. It is also called as ‘Ganga Maiya’ (Mother Ganga) or ‘Gangaji’. The holiness of Ganges water can be measured from the fact that any Hindu who holds this water in hand can never cheat or speak a lie. The ancient Hindu scriptures say that the touch, name and sight of Ganga cleanse all the sins of a person and taking a dip in the holy Ganga river bestows heavenly blessings.

Ganga water plays a very important role even in the death of a Hindu.It is said that one who dies around this river becomes free from all the sins and the person reaches the heavenly abode. When a Hindu dead body is cremated at the banks of Ganga or even its ashes are immersed in its water then it is believed that the departed soul attains salvation. For Hindus, the  ghats of Ganga river at Banaras are the holiest funeral detestation and this will liberate the soul from the cycle of life and death and attain nirvana, the ultimate goal of each soul.

According to Merriam Webster Dictionary “A Lota is a small, usually spherical water vessel of brass or copper used in India.” It is commonly used for storing or transferring small amounts of liquids such as water or milk. It is also widely used in various religious ceremonies.

American designer Charles Eames in his The India Report expressed a great admiration for the lota, saying about its design:

“Of all the objects we have seen and admired during our visit to India, the Lota, that simple vessel of everyday use, stands out as perhaps the greatest, the most beautiful.” I am now going to present you some of the most beautiful lotas designed and used to store and transport the sacred Ganga water.

The long neck Ganga Lota: The design and construction of this lota is an engineering marvel for its time and purpose. The wide circular collar below the water pot is meant to provide stability and grip to the lota even if placed on an uneven surface that prevents the lota from tilting and losing the precious Ganga water. The whole body of the lota is made out of thick brass metal and cannot be broken or cracked even at a severe accident. Maximum it can be dented. The long narrow neck prevents water spilling out fast even in a rare case of accident. In those days where travel to reach their destination took months, it is common that people became sick and in a few cases people would die on the way. In such cases the long and narrow neck of this lota is designed to have a good grip by the hand and pour  few drops of water in the mouth of the sick or about to die individuals which will either cure the person or take them to heaven if dead. The cap of the lota is screwed to the neck and the screw systems is hand-made and fits at ease, is tight and gap less to prevent any leakage of the sacred water. There is a handle attached to the cap and the handle is flexible so that it goes with the rhythm of the body or hand movement .This helps to keep the lota always straight and maintains equilibrium in spite of the movement of the hand while walking. The whole design is based on high principles of practicality and functionality with beautiful shape and aesthetic appeal.

Ganga Jamuna Lota : This lota acquires its name due to the combination of brass and copper separately in its fabrication. The waters of Ganga river are in the color of golden yellow represented by brass and the waters of Jamuna river are in reddish tinge represented by copper. In the holy confluence of Ganga river and Jamuna river at the holy place of Prayag now known as Allahabad, one can see the distinct colors of these rivers. This lota is relatively big in size with a handle.

My grandfather, Yenugu Krishna Murthy, whose name was given to me, brought the sacred waters of Ganga in this lota when he visited Kashi (present Varanasi) in the year 1937.This lota is around 75 years old. I understand from my mother (her name is Subba Laksmi) that he has celebrated his safe return from Kashi Yatra by serving food to all the known people in his village called Someswaram in East Godavari district of Andhra Pradesh and distributed holy water to most of the near and dear in small copper pots brought from Kashi for this purpose. My mother kept our share of the sacred water in a small copper vessel and got it sealed with tin foil to prevent evaporation of the sacred water and used to keep this Gangajal near our puja(worship)area next to family deities. Later the Ganga Jamuna lota was used to store Bellam Pakam (a honey like liquid taken out when Jaggery is prepared from sugarcane juice).My mother used to serve this bellam pakam as an accompaniment when she serves Dosa,  Vada or Dibbarotti. Some times we used to carry water in this lota when we were on tour by placing a small brass tumbler in the neck to prevent spillage of water and the tumbler was used for drinking water.

This lota is known as Gundu Lota (Gundu in telugu means round ) and it acquires this name because of its round shaped belly. It does not have a handle and it is picked up by placing five fingers around its rim. It has very intricately carved designs around its body and has great aesthetic appeal. This lota is collected from a known family  with an exchange .This lota must be over 90 years old as told by the family and can be corroborated by the smoothening of the design on it due to usage and frequent cleaning process. The designs on the latest lotas will be sharp and deep.

Traditional Lota-1: This is a typical Ganga lota shape with a wide base and narrow mouth. It slowly tapers towards the neck with a strong neck ring. The strong neck ismeant to withstand and hold the welding or riveting of a tin plate to seal the precious water inside to prevent spillage and evaporation. This item is brought from an antique dealer in Delhi.
Traditional Lota-2:This is exactly the same type of lota, the twin of traditional lota -1 but small in size and acquired from the same antique dealer in Delhi. You can see the sealing marks on the rim of this lota caused by peeling of the tin plate riveted to it.

Copper Lota: This lota is made out of copper having the typical traditional shape of Ganga lota. This lota is engraved with design. This was gifted to my grandfather with Gangajal in it by another person from his village Someswaram who had gone to Kashi and returned safely.

Dasha Mukha Lota:This lota is shaped out of ten facets or faces and hence known as Dasha Mukha lota. This is made out of bronze metal and has a fine and smooth surface.

Copper Gundu Lota: This is round shaped lota with intricate carvings. This again is a lota gifted to my grand father filled with Gangajal by one of our relatives who has gone to Kashi and returned safely. The water in the lota is used for several occasions in our family and has come to my collection once the entire water was used. When it is filled with water it is kept in the puja area.