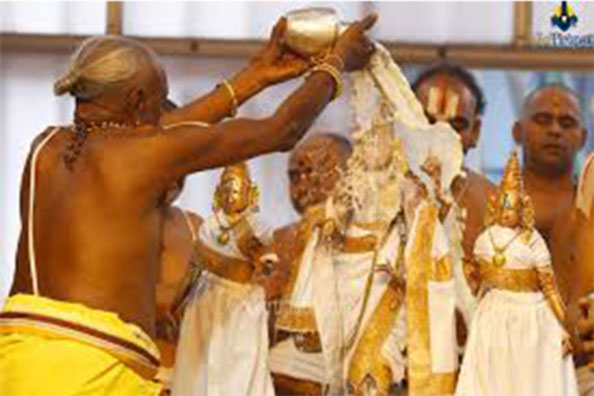 It is fascinating to know that the strong and prominent Brahmin Vaishnavite community of South India called Iyengars have their own exclusive religious mark, their own rituals and a chombu designed and created to carry on their rituals. This beautifully designed chombu shown in the picture is known as Iyengar Chombu in general. Another name for it is Mannargudi Chombu. The name derives from a very famous place of pilgrimage called Mannargudi near Kumbakonam, where there is a very ancient temple dedicated to Lord Rajagopalaswamy. Lord Krishna, in this temple, is in the form of a cowherd with attire, head gear, ear rings and a stick. A beautiful cow and a calf accompany him in the sanctum sanctorum.

It is said by great saints that we should try and emulate the  innocence of cow and the calf of the temple, who appear as if looking at the Lord to protect them from all harm and provide them with all necessities of life in this world which is full of doubts and treachery. The cow and the calf symbolize faith and trust in the Lord who is omnipresent to take care, protect, guide us all and keep us free of all worries.

The Origin Of The Iyengar Chombu

This chombu most probably originated in Mannargudi, because in ancient times, the whole area surrounding the temple was full of Sri Vaishnavites (Iyengars).  The daily life of the people involved many rituals which they strictly followed and these chombus were an integral part of their lives. They were used to perform Sandhya Vandhanam poojas.  These poojas were conducted by every Brahmin thrice each day:

Also, the chombus were used in marriage ceremonies, in any pooja like Seemantham (function for pregnant ladies to beget healthy and virtuous children), house warming, Upanayanam (thread wearing ceremony), Shraddha (funeral rites) etc. These chombus  were an indispensable part of the community.

In all poojas except the funeral rites, these chombus were kept in the centre on top of two layers of banana leaves. On the bottom banana leaf, rice with husk (nel in Tamil, dhanyam in Telugu) was kept.  On the top banana leaf, raw rice without the husk (arisi in Tamil and biyyam in Telugu) was kept. On top of this, the chombu was kept with about 5 to 6 or a bunch of Mango leaves with an unbroken coconut with sandalwood paste and vermilion applied to it and garlanded. The chombu used for this ritual with the decoration is known as kalasam.

In the funeral rites, the chombu is used to collect water and make a water ring around the departed soul. It is also used to carry milk which is used to pour on the ashes of the deceased person on the day after he/she is cremated, because it is considered impure and a sin to touch a bone directly. Milk protects the karta i.e. the ritual performer from any dosha (bad effect) before the ashes are immersed in any holy water.

Even during Shraddha ceremony, it is considered one of the important daan (charity) to be given to the Brahmin.

How I Collected These Iyengar Chmobus

I have collected these chombu from Sri Rajappan Gopalan who himself is a devout Iyengar and lives in Srivilliputtur where the famous temple for Andal is located. Andal is the only lady from Alwars who dedicated her life to the enrichment of Vaishnava Bhakti movement. These chombus were actually used for the religious ceremonies in their family. Sri Rajappan tells me the ancestors of their family were the archakas in the famous temple of Sri Venkateswara of Tirupathi.

The Significance Of The Design And Shape Of The Iyengar Chombu

Iyengar chombu has a curved bottom and when placed on the floor it rests only on the lower tip of the bottom. Most probably it is designed to have minimum area of contact with the floor to keep it pure. It has a large belly tapers up to form a narrow neck .The opening of the neck is wider thus allowing the water inside to flow out with ease. These chombus are hand-made with the joints skillfully hammered to form the shape. The outer edges of the opening of the mouth are folded back to form a nice metal ring which makes the chombu strong and sturdy. The shape of the neck is conveniently designed to have tight grip when held with hand to pour water or to hold it with five fingers when carried.

The shape is very important. Only these shapes are strictly allowed and permitted to be used in the temples for poojas etc. Shapes with round bottom or square ones are prohibited.  This is to segregate and let the common people know that it is only this shape which is valid for performing rituals.  Also, in those days, even families used brass and copper in their daily lives and round-bottomed or other shaped once were already being used for various other purposes.

People were using round and square-shaped brass chombus even for answering nature’s call in the open, hence the distinction was imperative.

The chombus made of only brass and copper were considered as “madi” i.e. pure and they could be taken right into the temple’s Garbha Grah. They also had anti-bacterial properties and so water for drinking purposes could be stored for long duration. After gold and silver, priority and importance were given to copper and brass.  Stainless steel was not heard of in those days and also aluminum was considered inferior and not “madi”. Copper chombus were used by people with good financial standing the society, as it was and still is expensive than brass. People who had the resources would buy copper ones to display their status, similar to gold, silver and diamonds.

Abhishekam is a ritual bath given to God. The nature and method of abhishekam varies as per the god.  In abhishekam to Lord Shiva, which is mostly done to the Shiva Lingam, the water is poured on the Shiva Lingam drop by drop by a special vessel devised for this purpose and hung above the Shiva Lingam. When devotees perform abhishekam, water is slowly poured on the Lingam through the snout of the kamandalam or simply by a copper or a brass chombu.To know more about usage of  kamandalam in Abhishekam for Lord Shiva   follow the link http://ykantiques.com/2013/08/antique-brass-and-copper-kamandalam.html

A Bit About The Iyengar Community

It is interesting to know about the community which created and used this wonderfully designed chombu, and their rituals, religious practices, customs and their philosophy. There are basically two subsects of Tamil Brahmin cast of South India. One sect is called Iyengar and the other sect is called Iyer. Iyengar sect worship Lord Vishnu and hence they are called Vaishnavites. Iyengars follow the Visishtadwaita (meaning Advaita with uniqueness) philosophy promulgated by Ramanuja who belongs to the period 1017-1137 and prominently display on their foreheads the Vaishnavaite cast mark known as Srivaishnava Urdhva Pundra generally known as namam.

Over a period of time, Iyengar community divided into two sub-sects namely Vadakalai and Thenkalai. Vadakalai sect followed Sanskrit vedas and they adopted Northern cult.Vadakalai sect paint their namam in “U” shape. The Thenkalai sect followed the teachings of Tamil Prabhandams consisting of 4,000 verses written by Alwars and compiled by the first Vaishnava Acharya, Nathamuni. Thenkalai sect paint their namam in “Y” shape.The Alwars are the South Indian saints passionately devoted to Vishnu. While both the sects have common understanding on most of the principles of Vaishnavism, there are certain differences as mentioned below.

The Major Differences Between Vadakalai and Thenkalai Sects Of Iyengars

1. The basic difference between the Vadakalai and Thenkalai sects is on the interpretation of ‘Prapatti,” the self-surrender to God. According to Vedic philosophy, the ultimate goal of human life – Purushardha – is to transcend the cycle of birth-death-rebirth or reincarnation and attain Moksha i.e. merger with the Brahman, the supreme soul.

According to Thenkalai, this is achieved by complete surrender to the grace of God by utter devotion by man and no human contribution is required for attainment of solvation and this principle is known as Marjala Nyaya (The cat principle).The mother cat takes care of the kittens completely and the kitten are to faithfully surrender to mother cat which is what is required for the kitten. According to Vadakalai, utter surrender to God is not enough. Man has to gain the grace of God by his service and actions and this theory is known as Markata Nyaya (the monkey principle).The baby monkey has to act and cling to the mother monkey and who in turn takes care of the baby monkey for protection.

2. Thenkalai Iyengar system is more liberal and accommodates all castes into the Vaishnavite faith whereas Vadakalai sect is conservative and rejects other castes from joining their fold.

4. One of the visual differences in the both sects is the Vaishnavite religious mark on their forehead called namam. Vedakalai wear their namam in “U” shape whereas Thenkalai wear their namam in “Y” shape. In both shapes of namam, the vertical open ends in white colour are upward directing to Vaikuntam, the abode of Lord Vishnu. The central line in red colour represents Goddess Lakshmi, the consort of Lord Vishnu. The entire namam symbol represents Vishnu padam (The lotus feet of Lord Vishnu)

The Vadakalai and Thenkalai sects often take extreme stands in protecting and practicing their respective rituals. In a particular case, the two sects have taken a stand on the issue of painting the namam on the temple elephant belonging to the renowned temple of Sri Devarajaswamy of Kancheepuram in Tamil Nadu state. The case is known as R Thathadesika Thathachariar Appellant versus  K V Alagai Manavala respondents. The appellant and respondent representing Vadakalai and Thenkalai sects of Vaishnavism insisted that the temple elephant should be marked with their respective namam symbol.

The group belonging to Vadakalai insisted that the forehead of the temple elephant should me painted with their symbol “U” namam and the Thenkalai group wanted the namam should be of Thenkalai mark of “Y” shape. The dispute that started with the lower courts has reached to high court Of Tamil Nadu and further went up to Supreme Court of India. In this case referred as LAWS(SC)-1992-2-61, the Supreme Court gave a judgement on February 04,1992 that the temple should use two elephants on all important rituals and processions each bearing the namam of Vadakalai and Thenkalai mark respectively. This is the level to which these two sub sects of Vaishnavism have gone to ascertain and defend their faith.

2 thoughts on “Iyengar Chombu – An Integral Part Of Vaishnavite Rituals”

Back to Basics-Antique Stone Cooking and Storage Pots