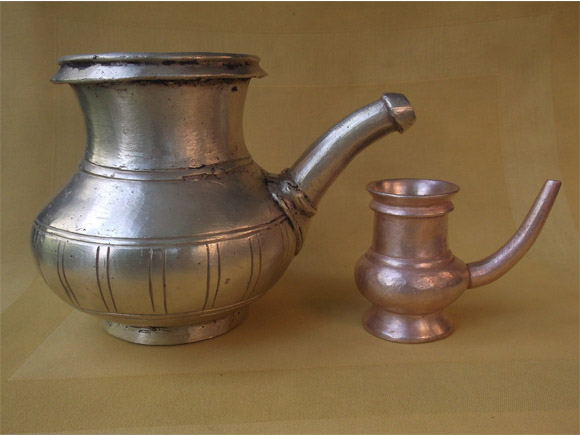 Kindi is a type of Indian lota or chambu with a spout mostly used in kerala state, India, as a multipurpose vessel.It is used as a water dispenser for various pooja rituals and daily ablutions. Kindi like vessel with spout is also used in Andhra Pradesh and is called KommuChambu. Similar kindis are used in north India with a handle and is called kamandalam. The kindi is said to have existed since the dawn of the civilisation to store and carry water from place to place. The primitive kindi is made with clay and as the civilisation progressed, kindis are made with metals like brass, bronze, copper, silver and even gold and in various sizes. The smallest size one normally made either with silver or gold is used for ritual pooja and the larger ones generally made out of brass or bronze are used for daily ablutions.

I have collected 2 beautiful kindis as shown in the picture. The large kindi is made with brass and the small one with copper.

The antique brass Kindi: This kindi has a wonderful shape with a bottom rim for support, a large bellyto hold water, a smoothly curved neck and a wide mouth on the top of the neck to receivethe water. There is a concave curved spout attached to the belly with a ring around the hole of the spout to protect the whole from accidental damage.The wide mouth has a sloping grip ring which is designed to carry the kindi with the five fingers. There is embossed ring around the base of the neck. There are parallel line designs around the large belly that arehandmade. The belly is filled up with water poured from the open mouth and water is dispensed through the hole of the spout. I have purchased this lovely kindi from RASI silk house, a reputed shop near Kapaleswara temple, Mylapore, Chennai, in the year 1994who used to sell rare antiques along with classical silk saris and dress material.

The antique copper Kindi: This cute copper kindi has different design. It has a larger straight neck than the belly.The neck opening is flared at the top.There is a grip ring just below the flared neck opening. The  spout has a convex curve.There is an embossed ring joining the belly and the neck. This pretty copper kindi is gifted to me by my colleague from Kerala by name Subramani in the year 1984.I was told that his grandfather was using this kindi for pooja and abhishekam purpose.

The design of Kindi: The shape of the kindi is designed to minimise the wastage of water.The narrow spout opening will dispense water that is just required for the purpose like washing feet, hand and drinking without any spillage or loss. Its design is such that water will not get contaminated as the fingers will never touch the water when the kindi is used.

The multiple uses of Kndi

VellaKindi:  VellaKindi is used for storing and drinking water. It is a common practice in traditional south Indian families few decades ago to keep a kindi filled with water at the entrance of the house on the first step. The traditional houses used to have in the front an elevated plat form on both sides of the steps leading to the entrance called Arugu in Telugu and Arukkanchatti in Malayalam. VellaKindi is placed on the first stepand the guest is expected to wash his feet, hands and face with the water from the kindi. Thereafter the guest would sit on the Arugu and drink the water from the protruding spout  of the same kindi. In certain communities like south Indian Brahmins, they practice a hygienic tradition called yengily in Telugu and Echai in Tamil in which the person while drinking water should not touch the vessel with his lips. If it touches the lips, the content of the vessel becomes impure for consumption by other person. Kindi is designed to beat this practice since the spout helps to take water from the vessel without touching the lips. Thus it is convenient to have multiple people have the water from the same kindi. Kindi is also used to clean the hands after taking the meals.

Pooja kindi: Pooja kindi is used for Hindu ceremonial prayer known as pooja. Kindi is a must in most of the communities in Kerala particularly in Namboodri and Nair communities. The kindi is used to perform abhishekam to idols by pouring water or milk on the deities through the spout of the kindi. The same kindi is used for giving theertam to devotees after the pooja. For achamanam ritual (drinking small quantities of water during pooja) people in the other regions use uddarini and panchapatram for using small quantity of water but kindi is used in place of Uddarini in kerala. Udharani is also used in the pooja ritual of Arghyam, and Sandhya. Uddarini is also used to distribute holy water as prasadam to devotees.

In Kerala, Kindi is an integral part of any religious ritual. It is a tradition in Nair families that the bride should bring one kindi along with the utensils she brings to her new family after the marriage. It is a traditional practice to gift the new bride with a set of seven vessels called Ezhupaatram comprising of the inevitable kindi, Kuthuvilakku (oil lamp), Thambalam, Kolambi(spittoon) and assorted plates in brass or bronze.

The oil Kindi: Herbal oil is used during the Ayurvedic treatment for oil massages. Kindi is invariably used to pour the oil on the massaged body.The quantity of the oil required can be controlled by the movement of the wrist when pouring oil through the spout of the Kindi. Kindi is so convenient that the poring can be handled by one hand with precision while the second is used to spread the oil on the body.

Kindi for ceremonies: The Hindu marriage ceremony is actually called Kanyadanam, meaning gifting a virgin girl.The bride groom is considered as Maha Vishnu and the father of the bride gifts his daughter to the groom by washing his feet with water and giving a coconut to the groom as a symbol of giving his daughter.For washing the feet of the groom kindi is used as a tradition. In annual death ceremonies of the departed elders known as Shraddha, it is a tradition to use Kindi for washing the Brahmin’s feet that are considered as Devas and Pitrs.

The story of Sukracharya and kindi: There is a famous story in puranas depicting how Sukracharya, the guru of asuras, lost his eye due to blocking the hole of a kindi. Bali is a great asura king and he has conquered both the earth and the heavens and thrown Indra out from his kingdom of Devas. Indra prays to lord Vishnu to restore his kingdom. Lord Vishnu visits Bali in the form of a dwarf Brahmin called Vamana, asks for a boon of tripada (three feet lengh) of land and Bali grants the boon to Vishnu. It is a tradition that any boon granted should be accompanied with water as a witness to the granting. Sukracharya is against Bali granting boon to Vamana and hides himself in the hole of the spout of the Kindi to prevent water flowing out thus hampering the boon. Vamana takes a dharba grass and pierces the hole to dislodge Sukrachrya and in the process Sukracharya becomes blind in one eye. For complete story on Vamana and Bali and how Sukracharya lost his eye please read the article by clicking on the following link.

The evolution of Kindi: According to Vedic knowledge, the entire universe is the manifestation of panchabhuta in varying combinations dictated by cosmic laws. The panchabhuta, the five elements, are -earth, water, fire, air and ether. The panchabhuta are the basic elements that form the life force.Thus Hindus consider water as a basic life giving and sustaining force. Any element that is a life giving force should be pure and hence water is considered as pure and purifier.Water as a purifier has taken the vital role in all Hindu rituals and daily life. In India water is called Ganga devi elevating water to the divine status of goddess. Man from times immemorial has been creating vessels to carry the life giving water along with him to quench his thirst and to use for religious ceremonies. Starting from the earthen vessel, kindi has taken various forms of evolution and taken a central place in many of the houses few decades ago made out of Bell metal, brass, copper, silver and even gold.

Some attribute the origin of present Kindi to the cultural invasion by Arabs to the coast of Kerala in South India. They came to Kerala via sea route for trade and gradually settled in Kerala coast by marrying the locals.Now there exists a community called Mapalai literally meaning son-in-law who resemble Arabs and blended themselves into Malayali culture. It is a practice in Arab culture that they share food from common plate and drink water from a single jug. Indians use each separate plate for food coand separate vessel to drink water. One school of thought believes that it is Arabs who invented the Kindi. This vessel with a spout satisfied the cultural element of both societies in a way that water can be shared by all from the single vessel and at the same time the lips are not in contact with the water.