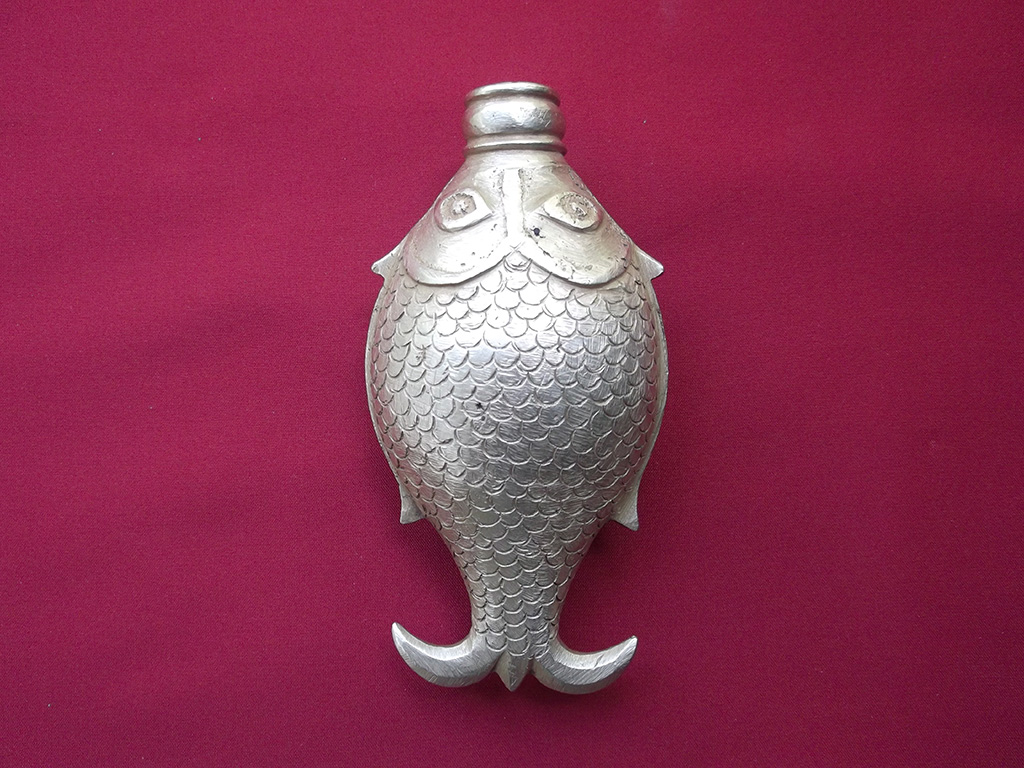 This wonderful art object in the form of a fish is actually a Bharani (Container) made out of Brass metal used for storage of red powder called Tiruchoornam. Tiruchoornam is used by Vaishnavite sect of Hindu Brahmin Community to apply Namam, a religious mark on their forehead.

Vaishnavism and the Namam

Namam mark is a visible sign of a person belonging to a particular sect of Hindu religion. The followers of Vishnu, called Vaishnavites, apply this mark on their foreheads in “U” shape depicting the foot of Lord Vishnu. The “U” shape mark also contains a red straight line in the centre of “U” depicting goddess Lakshmi the consort of Vishnuand Goddess of wealth and prosperity.

The centre line is made up of red ochre powder which is called Sindhoor or Tiruchoornam or Trichoornam. The “U” shape in white colour is made out of white soft stone known as Sudda. The namam mark is also called Tilak mark.

The red line was originally drawn from a red stone available within the ant hill. The ants usually build their ant hill on top of the red stones. When the stone is rubbed in water, a red colour paste is formed.

This Fish shaped Bharani is used for storing Tiruchoornam that is red powder.

Lord Vishnu is the supreme God for Vaishnavites. Whenever the need arises, Vishnu takes avatars (incarnations) and comes down to earth to destroy the evil and to protect and uphold virtue on earth. One of his avatars is Matsyavatar (matsya means fish and avatar means incarnation). To commemorate Matsyavatar the artisan has made the Bharani in the shape of Fish.

How to apply Namam on the forehead?

The white colour stone is cut into small sizes in the shape of handy slabs for easy handling and use. One can put some water in the palm and rub the white stone on the wet palm till you get a white paste.

This paste can be applied on the forehead in “U” shape by the help of a thin metal rod or wooden stick the size of a tooth pick. Some experienced people use fingers directly without using any device. The white paste will dry in no time forming a bright “U” shaped mark.

Tiruchoornam powder is used for central red line. The powder is kept on the palm and few drops of water is added and rubbed nicely with the thumb to have a nice red paste. Central line is drawn with the red paste using a tooth pick like device in between the white lines.

The lid has a handmade screw system having 5 threads. Its knob has diamond cut design having 13 diamond cut faces. The lid can be closed tightly due to threads and make the powder leak proof. With 13 diamond cuts, the screwing and unscrewing can be done smoothly and efficiently with a tight grip and there is no chance of slippage at the time of handling.

The fish scales on the body are beautifully hand carved. Similarly, the fins on both sides are symmetrically hand finished. The gill covers over the eyes are neatly shaped. The eyes are realistic and lively. The symmetry and anatomy of the body is perfectly carved. This is a rare piece of religious artefact.

The story of Matsyavatar (Fish Incarnation)

This is the first Avatar of Lord Vishnu. This happened in Chakshusha  Manvantara in Krita Yuga. The story of Matsyavatara is found in Shrimad Bhagavatha, 8th sanda (Chapter).

At the end of one of the Kalpas, Lord Brahma felt sleepy and opened his mouth for a yawn. Without his knowledge the four Vedas slipped from his opened mouth. A Daitya (demon) by name Hayagreeva noticed the Vedas and snatched them. Lord Vishnu observed the theft of Vedas by Hayagreeva and decided to retrieve the Vedas and return them to Lord Brahma to continue his creation in the next Kalpa which is a day break for Brahma. According to Brahma calendar, one day of Brahma is equal to one Kalpa on earth. Lord Vishnu instead of directly attacking him and retrieving the Vedas chose to wait and combine this task with another important work of saving his Bhakta (disciple) and noble king Satya Vrata from the forthcoming Pralaya (deluge). Lord Vishnu decides to descend on to earth from his abode Vaikuntam in the form of a fish to accomplish these two tasks.

One day King Satya Vrata was performing Sandhya Vandanam (daily ritual prayers) by offering Tarpana (offering of water) from the waters of river Kritamala. A small fish came into his cupped palms along with the waters. He slipped the fish back to waters. When he lifted second round of cupped waters, the fish reappeared in the waters and this incident kept on repeating. Finally, King Satya Vrata placed the fish in his Kamandalu and took it to his palace and kept it in a tub. The fish out grew the tub next day. He then transferred it to a well, to a pond, to a lake, to the river and finally to the sea to accommodate the growing form of the fish. Satya Vrata realised that the fish is not an ordinary fish and prayed to God to reveal the mystery of the fish. Then the fish spoke and   revealed that he is the Lord Vishnu in the form of fish.

Lord Vishnu pleased with his Bhakta asked him what he desired. Satya Vrata said that he did not want anything for himself but wished to be instrumental in saving the worthy souls from the impending Pralaya.

Lord Vishnu in Matsyavatara told Satya Vrata that a (a great deluge) will inundate earth on the seventh day and destroy everything on earth. Lord Vishnu told Satya Vrata that he will send a huge boat and Satya Vrata should be on-board with all herbs, seeds, beings of all variety along with Sapta Rishis (seven sages) who will survive the deluge and enter into next Kalpa .The fish further instructed that he should use Vasuki ,the great serpent, as a rope and tie the boat to the horn of the fish. Satya Vrata followed all the instructions of the fish and the entire crew of the boat were saved from the great deluge. During the sailing of the boat throughout the night of Brahma, Lord Vishnu gave Upadesha (divine preaching) to Satya Vrata and the seven sages and his Upadesha later came to be known as Matsya Purana. After the boat crew reached safety the great fish attacked the demon Hayagreeva and retrieved the Vedas from him. He then handed over the Vedas to Lord Brahma.

Thus, in Matsyavatara, Lord Vishnu saves his devotees, destroys the demon Hayagreeva and restores the great Vedas to Brahma. Satya Vrata is known as Vaivaswatha Manu in the Chakshusha Manvantara.

Vaivasvata is a Sanskrit word meaning “sun-born” and he is born to the Great Sun God. In religious scriptures, Vaivasvata is a sage and he is also one of the Manus, or divine lawgivers, who have shown the way to mankind how to lead a right life.

Influence of religion on art:

The brass antique container in the shape of a fish for sindhoor powder is the best example as to how religion influences the art. The artisan has depicted the entire story of Matsyavatara of Lord Vishnu in a simple object like powder container in the form of a fish but crafted with extraordinary skill. In ancient times art emerged from myth, and religion, and it has maintained its compelling influence through its sacred aura. The intense spiritual and religious beliefs have played a dominant role in influencing the Indian art. The Indian artists visualized the various aspects of Gods and Goddesses as mentioned in the scriptures and infused these aspects into the objects of everyday life for religious rituals like the application of Namam on the forehead by the Vaishnavites and the fish container for the red powder Trichoornam for their Namam.