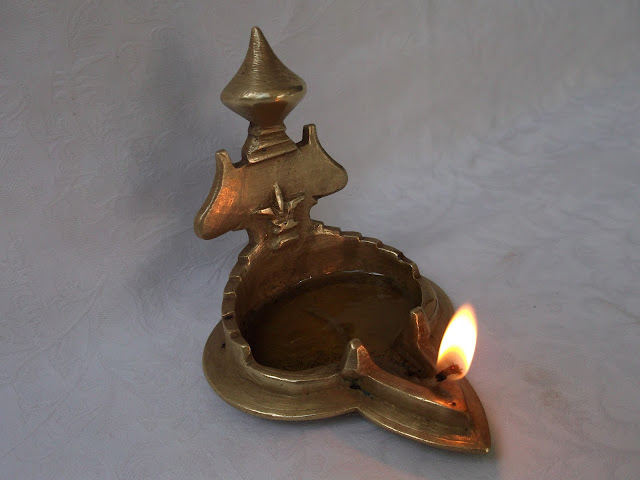 Life in India is colorful, spiritual, beautiful and at the same time simple and mundane. The objects or things used in daily life are combined with functionality and beauty. The spirit behind this is most probably the Hindu faith that there is only one ultimate reality that is called God or Super soul and the entire universe is the manifestation of God. It is this strong faith that makes a Hindu see divinity in everything that exists in this universe. This is the reason for the strange practices we see that some pray to stones, trees and a snake. According to the holy scriptures of Hindu religion the attributes of God are Satyam (eternal truth), Shivam (goodness, universal welfare, auspicious) and Sundaram (beautiful, aesthetic, inner bliss). For a spiritual Hindu, these are the guiding principles of life.This philosophy is most visible in the religious ceremonies,marriages,temple construction and in daily utility articles that are a combination of utility and beauty.This philosophy is also applicable for creation of  antique oil lamps of India.I am going to present to you some of the oil lamps I have collected. I always enjoyed admiring their beauty and I hope you do too.

This beautifully shaped antique oil diya is known as Vishnu oil lamp(Vishnu diya) and is used in the temples belonging to Vaishnavism that is Lord Vishnu followers. This can be observed by the design, the symbols and figures sculptured on this lamp. The base of this brass oil lamp is round shaped with a protruding snout to keep the wick of the lamp that gives the flame .The shallow cup of the Vishnu diya is to store oil that serves as a fuel to the wick. The back side of the oil diya has symbols and figures that actually describe the purpose for which it is made and the place it belongs.

Vishnu Symbol- Forehead mark
In the center of Vishnu diya, you will find The Mark of Vishnu represented by three lines, the outer two lines curved and joined at the bottom and the middle line straight.Vishnu followers will wear this mark on their foreheads.This symbol or mark is called Sricharanam(Sri-auspicious, Charanam-feet).Members of the Sri Vaishnava tradition form a tilak with two lines representing the feet of Narayana with a red line in the middle which represents Lakshmidevi.A small line under the Sricharanam represents that the wearer belongs to the Thenkalai subsect of Vaishnavism.

Surya symbol
Surya is the god of light and fire. There is no life without light of the sun. In the trinity, the role of Vishnu is described as life sustainer and preserver of the universe .It is believed that the Sun god is an incarnation of Lord Vishnu. In the form of Surya, Lord Vishnu is usually worshipped on the festival of Ratha Saptami that falls on the seventh day (saptami) of the bright half of Hindu month of Magha. A Surya symbol is also carved on the brass oil lamp to indicate that this lamp also gives the light the way Surya gives. This light dispels darkness ignorance and illuminates the area (enlightenment)

The Moon symbol
You will find the moon symbol to the right side of Tilak mark. The equivalent word for moon in Sanskrit language is Chandra. The meaning of Chandra in Sanskrit is “bright and shining”. In Hindu mythology, the moon god is known as Chandra. When the gods and demons churned the Ocean of Milk (Chandra was born in this ocean) for Amrita (nectar), the gods were nearly blinded with his lustrous body. Hence the gods sent him into the cosmos to provide light to the creation with his glowing body. Goddess Lakshmi was also born from the same ocean of milk and hence Chandra is considered as her brother. Lakshmi is married to Vishnu .Thus Chandra becomes the brother -in-law of Vishnu. Vishnu in his avatar as Rama takes the name of Rama Chandra signifying his relationship with moon god. This is the reason for moon to appear in the Vishnu diya.

The fire symbol
The flames of fire surrounding the back side of the antique oil diya depict Vishnu as the embodiment of the ever burning, shining and gleaming cosmic fire. He fills the whole universe. He is surrounded by the glowing and flickering groups of galaxies. The entire aspect is to be visualized as dynamism, radiance and glow of the cosmic fire around Lord Vishnu and the same thing is depicted on the outer ring of the brass oil lamp. In his Vishwaroopam, Vishnu is depicted showing the entire universe within him.

Parrot figures
The Vishnu diya has 4 figures of the bird parrot. Two parrots joining the base with the back panel and two parrots joining the flames with Garuda figure. The reason for giving such a prominence to parrot is that it is the vehicle of Kamadeva, who is the son of Lakshmi and Vishnu. Kamadeva is also known as Manmadha,Ananga, Madana and Kāma.Thus, parrot or suka (in Sanskrit) has very strong romantic connotations. The beak of the parrot is red indicating desire and passion and its wings and body in green color indicating satisfied desire and full of joy. The red beak and green body are also related to fertility and prosperity. The red indicating the earth before the rains and green indicating the green earth after the rains. Thus the symbol of parrot is very closely associated with Vishnu and Vaishnavism.

Garuda figure
You will see prominently the Garuda image at the top of the back panel of this antique oil diya. Garuda is the carrier or vahana of Vishnu and the king of birds. Garuda is with the head and wings of eagle and his body is like that of a man.Surya’s charioteer is Aruna(the red one),who is the wise elder brother of Garuda, and is also the deity of dawn.In all vaishnavait temples, the deity is taken on procession seated on Garuda vahana.In the famous Tirupati temple, Lord Venkateshwara(Vishnu avatar) is taken on procession on Garuda vahanam during Bramhostavam auspicious days and thousands of devotees gather on that day at the temple to have the Darshan of Venkateswara seated on Garuda.

The Snake symbol
You will also notice two snake like symbols running on the edges of the back panel and enclosing the Sun symbol, Vishnu Sricharanam symbol and Moon symbol.This symbol is the representation of Ananta Shesha,the divine serpent.Lord Vishnu rests on the coils of this divine serpent Shesha, also known as Ananta.The resting Vishnu is depicted as Ananthpadmanabhan resting on the coils of Anantha floating in the ocean of the changing world with Laksmi at his feet.He is also known as Adishesha(the foremost of snakes) and Anantashesha or just Ananta(endless, as he is known to remain in existence even after the end of the Kalpa, when the whole world is destroyed). The thousand heads of Shesha swing to and fro over Vishnu’s body, creating a shelter and divan for the Lord.

From the above depiction and description of the various symbols and figures on the brass oil lamp,you will see the concept,depth of imagination and construction of this lamp that depicts in a single form the entire Vishnu mythology and vaishnava philosophy.

I am also showing here one more antique oil diya of Vishnu cult.This diya is simple in the form and depicts only the Vishnu tilak Sricharanam. On the top of the back panel is shown a figure that resembles the tip of a crown or Mukut. May be the craftsman wants to show only the tip of a Vishnu crown which is the top most aspect of Vishnu image.

Vishnu diya – The source
I have acquired this antique oil lamp from a family of Indian antique collectors. During one of my visits to Vijayawada, where my father-in-law Machraju Bhaskar Rao and his family resides, my nephew Bhaskar Machiraju( we lovingly call him Babi) informed me one day that his friend’s family are  having some antique oil lamps and they are prepared to sell part of their collections. Babi is aware of my passion for antiques. Immediately we rushed to their house and I managed to pick up these two antique brass oil lamps.