December 21, 2011February 25, 2018 by YK Murthy
The Origin of ink-pot as per Indian Mythology :
According to Hindu scriptures the souls of all dead beings go to Yamapuri. Here the god of death Yama Dharmaraja punishes or rewards them as per the evil deeds or good deeds they have done in their life. The souls who have done more of evil deeds will go to hell where the soul receives punishment and the souls who have done predominantly good deeds go to heaven where they will be rewarded with good life. It is the duty of Yama Dharmaraja to keep a record of the deeds done by the souls and judge them after their death.
According to Yamasamhita, the ninth chapter of the ancient literature dealing with the Hindu Law Ahilya Kamdhenu, Yama Dharmaraja approached Lord Brahma and narrated to him about his difficulty in keeping a record of the deeds of so many souls for judgment and sought his help. Hence, Lord Brahma deeply meditated for a long time and with the power of his meditation, he created a person who appeared with an ink pot and a pen in his hands and had a sword belted to his waist. That is how the first ink pot came into existence. The person was named Chitragupta because he was conceived in Lord Brahma’s mind (Chitra) in secrecy (Gupta).Then Lord Brahma declared that Chitragupta will help Yama Dharmaraja in maintaining the records of evil and good deeds done by the souls. 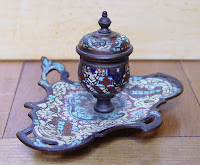 and spread to Japan. With the invention of paper in Europe in around 14th century and use of refined ink material and writing instruments, ink-pots were liberally used and were available in variety.

stationary, of different times etc. While selecting an antique ink pot one should look at these criteria based on which the value of the ink pot is adjudged. One should see there are no cracks or ledges inside or outside of the ink pot. Aesthetics play an important role in the selection of ink pot since this piece is going to be a proud display at work table or space decoration.

The ink pot shown in the picture is made out of brass hand molding in the shape of the orient pagoda. I have seen this art master piece in an antique shop in the city of Ahmedabad in the state of Gujarat, India and purchased immediately in the year 1991and ever since it is in my possession. The ink pot is made in two parts i.e. the actual ink pot and the lid for the pot.Both the ink pot and the lid are chained together with brass chain so that they are not separated by chance and the lid is always available nearby when the user wants to close the pot. The craftsman who made this ink pot has also inscribed the name of the master who had ordered him to make it

One thought on “Antique Ink-pot”